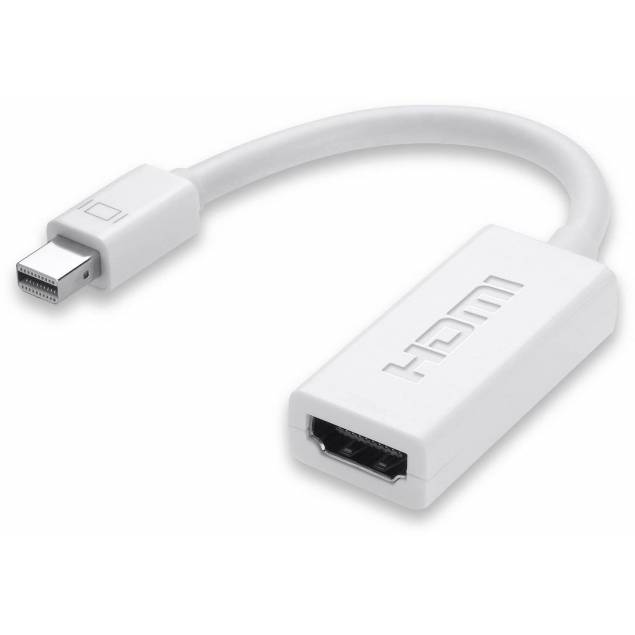 Fits in any computer with a Mini DisplayPort or a Thunderbolt port - that is, a desktop port. almost all Macbook's the last several years.

?? ?? Our premium Mini DisplayPort adapter produced by ourselves Mackabler.dk, can be found here:
Premium Mini display port for HDMI Adapter with 4k

With this smart adapter from Mini DP (DisplayPort) to HDMI, you can plug a Mac that doesn't have an HDMI output into your TV and expand your digital desktop, watch movies or just play games on a bigger screen. You can use it for a wilder digital experience using the TV, so you can watch Netflix, HBO Go, Youtube or just have more screen space. The cable adapter is similar to Apple's own, is almost of the same quality and supports sound, so you also don't have to think about using an additional cable. It's easy to use and easy to carry.

The adapter, unlike other low-cost adapters, also supports audio, and up to full HD resolution, ie. 1920x1080 pixels or PC solution 1920x1200. Both formats are crisp digital with millions of colours.

We have spent a year and a half and contacted over 20 suppliers to find the best quality of this adapter. In general, the quality is very poor on this type of adapters, so when we found the current adapter, produced by a very small factory in China, we struck right away. The factory has about 20 employees and is run by a family, where everyone from the family is in the shop.

The Mac HDMI adapter is passive and it is powered by the Mini DisplayPort , which is normal for this type of adapter. The connector is extra reinforced at the mini DisplayPort end (Thunderbolt) as this is where the HDMI adapter is most vulnerable. The adaptar is also doused with glue to distribute the pressure over as much plastic as possible so that nothing breaks.

You can easily buy a cheap 24" (inch) display, but it's a little tricky to get connected to a Macbook, as most Macbooks only have a Mini DisplayPort or Thunderbolt port. This is exactly where this adapter comes in: Then you can quickly get connected to an external, inexpensive monitor. Sit I mange together and play? This adapter is also smart, as you will be able to play on the TV - and have much better opportunity for everyone to see! Whether this is Angry Birds, StarCraft or something else entirely.

With this adapter, you'll need an HDMI cable. You may already have a home, and otherwise you can buy it here from Mackabler.dk. You can also invest in a premium Mini DisplayPort adapter that supports Thunderbolt 2 and therefore 4k resolutions. You'll find it here: Premium Mini DisplayPort for 4k HDMI Adapter.

This Thunderbolt for HDMI adapter has plug and play. Simply plug the adapter into your computer and plug the HDMI cable into the TV and adapter and it works! Quickly and easily, you'll see the content from your computer on an external monitor or TV.

In some cases, however, you'll need to get into settings and turn on screen duplication if you want your TV to display exactly the same content as what you see on your computer screen. The Mini DisplayPort for hdmi adapter supports audio with all Macs that are newer than 2010. Check for a safety in the table below. In "Sound" in system settings you can very quickly and easily choose which of your speakers to play the sound.

It's super easy. The cable is small and light, and can always be carried in the bag or back pocket.

Not this cable you're looking for? If you have an older Macbook or iMac, it uses this connector instead of: Mini-DVI for HDMI Or USB-C for HDMI. 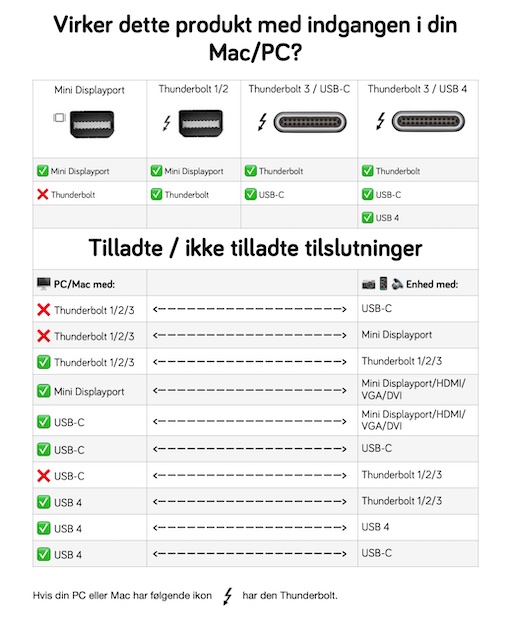