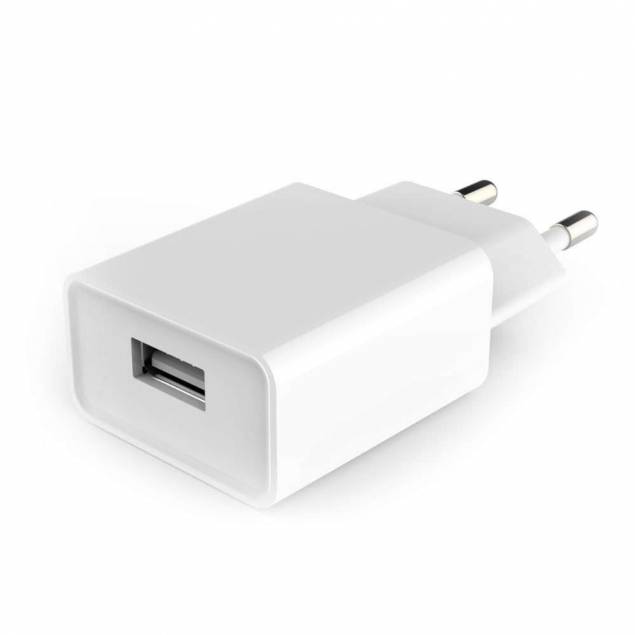 iPad charger in the beautiful white and iconic Apple color and in a smaller and tastier size than Apple's and at least as safe!

The charger is made for iPads with 12W charging, but it can also easily charge iPhones and other devices that use a USB plug to charge with - nothing happens when you do that.

We also have this one with an extra USB-C connector: 20W M7 charger

This charger was replaced in May 2019 when we switched to a new design and found a better factory to make them. The chargers are somewhat more expensive and more difficult to make, but we have not raised the price on them, and we are super satisfied with them and think they are among the best chargers we have - especially for the price.

It is a standard charger with USB plug (12W, Watt) for iPad, which fits in an EU power plug. This charger is made as a replacement or supplement for the one that comes with the purchase of an iPad from Apple.

It can also be used as an iPhone charger. The charger provides iPhone newer than iPhone 6, 10W and others 5W. It charges with a maximum of 2.4A at 5V.

This charger is really nice and safe. The manufacturer complies with all regulations for both the EU and even exceeds them, and under the download section you can find all safety tests if you are interested in seeing them yourself.

The charger is smaller than the original one from Apple. It works easily and quickly without much fuss and is good both as a replacement and extra USB charger.

Apple's iPads use either 5W (iPad Mini), 10W (iPad 1,2,3 and iPad Mini Retina) or 12W (iPad 4 and iPad Air etc). Since a 12W charger can supply both 12W, 10W and 5W, it can be used for all iPhones, iPods and iPads. There is a small fuse in the iPad charger with 12W, which both ensures that the charger does not provide too much current, so it is ensured that the iPad charger only provides the strength of current that your iDevice needs. This means that this 12W charger will not provide too much power for a 5W iPhone or a 10W iPad.

No cable is included with this charger, but if you are missing one, it can be purchased here on the page under Lightning cable or 30pin cable - so it is not included.

The 12W chargers are made for iPads or iPhones 6-> but also work with all other iPhones and iPads, regardless of the amount of power they need. The charger can be used with an original or non-original Apple cable, either the old 30pin or the new 8pins (both cables can be purchased here on the site). The USB charger also works with most other tablets, although you have to add a USB cable that fits the particular tablet yourself.