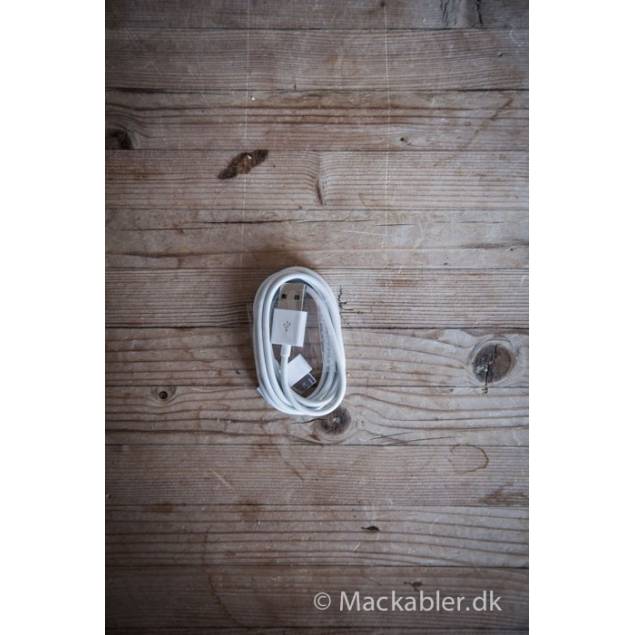 This Dock/30pin connector with USB 2.0 connects your iPhone/iPod/iPad directly to your computer or charger through the USB port, and can thus be used to sync with iTunes or upload. Works with iOS7, iOS8 and iOS9 and upwards. 30 pin cables here are available with quantity discount, the discount can be seen below.

The 30pin cable can be used to charge iPhone, iPod, or iPad through a USB power supply or directly from your computer's USB port (both on Mac and PC).

30 pin cables are being phased out, but that doesn't mean we should throw out our old good iPad's or iPhone's with 30 pin connectors, not yet.

Our 30pin dock cable is in the same white color and of the same quality as Apple's own, and has a length of 100cm (1 meter), however, you can also choose 2m or 3m if you'd rather have them.

With this iPhone cable, you can charge your iPhone, iPod, or iPad* using both a Windows and Mac or via a usb charger. The iPhone/iPod/iPad* cable can also be used to sync your phone and to transfer data such as videos or photos. The cable works exactly like the iPhone cable when purchasing a new iPhone.

The latest iPhone that uses this cable is an iPhone 4s, so it can't be used with iPhone 5 or later.

This Appel dock cable doesn't have any compatibility issues either with the iPhone, iPad or iPod in any generations or with any software they work for all iUnits with 30-pin dock connectivity.

This 30pin cable is most used for charging the iPhone 4 or iPhone 4s, as it is these phones that are still being used, iPhones before are almost out of the market, however there are also many who still use their iPad's with 30pin connectors, iPad 2 and iPad 3 are properly used, this cable also works perfectly for these.

With an extra 30pin iPhone cable in your bag, you'll never be left short of power again. There is always a USB connector nearby, either in your own or a friend's computer, or there is an outlet you can plug in using a USB charger, which we also sell here on the page.

For example, the cable can be used as an iPhone 4S charger, or as an iPhone 4 cable when you need to sync your iPhone. Whether you have an iPhone 4 or 4S (USB connector) charger or older, this cable is also suitable.

Apple calls a cable similar to our 30 pin cable for one: 30 pins to USB cable from Apple.

*30pin cable of 3 meters charges very slowly with iPad 1, 2 and 3. We therefore recommend that 1 or 2 meters be purchased instead. There is no problem on iPhones.